Time to dive deep under the sea and explore the lost city of Atlantis in ReelPlay's Megaways slot. Learn more about this game's unique features and where to play it below. 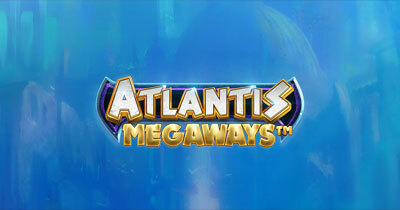 Atlantis Megaways is a ReelPlay game with a solid RTP of 96.10% and 117,649 ways to win, thanks to the popular Megaways mechanics.

Take a dive underwater to find the lost city of Atlantis, which carries hidden treasures, including a maximum jackpot of 8,641x your bet.

With multiple bonus rounds, including free spins, there are a number of ways to win. While there are no Free Spins, Atlantis Megaways features re-spins and its medium volatility gives players more ways to win than in most Megaways games. The game’s great graphics are just an added bonus.

Read through our team of experts review of Atlantis Megaways below for more details!

How we tested Atlantis Megaways

Our team of experts at USOnlineCasino.com weighs every aspect of a game when we do our reviews.

Here’s a list of all the steps we take into consideration:

We look at RTP and volatility:

The Return To Player and Volatility should always be the first thing a player looks at in a game. The RTP tells you how often you can expect to win while spinning the reels.

We actually play the games:

Unlike many reviews you find online, we take the time to play the games to understand how they work. We’ll tell you our honest opinion on if we enjoyed the game or not.

We find out minimum and maximum wagers:

A good game should be accessible to all types of players, including those that like to wager small bets to high rollers. We provide this information in all of our reviews.

We focus on the theme:

All good games should have an appealing theme. While most themes are apparent, we like to detail how well the game truly envelops its overall concept.

We listen to the audio and pay attention to graphics:

Players want games with HD graphics and engaging audio to enjoy while playing. We have all that information and more below.

We calculate the jackpot and maximum win:

We play games for fun, but we also play to win. We’ll tell you the full potential win of a game and explain what that means.

We explain the symbols and paytables:

To play well, you need to understand the game’s rules. While the “how-to” of online slots is simple, it’s essential to know what the symbols mean on the reels to understand your spin’s total value.

Make sure to read our comprehensive online casino reviews to find the best welcome bonus for you. There are many ways to get the best value from joining an online casino, from free spins to first deposit matches and low wagering requirements.

Atlantis Megaways is available at multiple USA online casinos including Borgata  New Jersey, which offers one of the most competitive welcome bonuses in the country.

New players who register for an account can receive a $20 no deposit bonus and a $1,000 match bonus.

Atlantis Megaways is a refreshing new addition to the Megaways series, courtesy of ReelPlay, which debuts with a standard six-reel game, great graphics, and multiple features to maximize gameplay excitement. In this game, players can win up to 117,649 ways per spin, which is a big part of the Megaways popularity.

While there isn’t the maximum jackpot of other Megaways games, re-spins can provide bigger multipliers than free spins, and with multiple features, this game shapes up like a new-age game.

It’s simple to play with many ways to win, providing a solid modern-day Megaways experience, especially as a new provider enters the market.

By reading our review, you should have a good grasp of how the game works.

Here, we will take a look at the symbols in the game, their payouts, and how they’re deployed in the game.

Atlantis Megaways has a variety of symbols, from low-level symbols to premium symbols. Like many games, this slot’s low-value symbols are playing cards 9 through Ace.

Here are the multipliers for the symbols in Atlantis Megaways:

The Wild symbol in Atlantis Megaways is a Temple. The Temple only appears in the game’s top reel and can result in winning lines by taking the place of regular symbols.

The Scatter symbol is the Treasure Chest, which is perhaps the most important symbol in the game: Treasure Chest not only unlocks big multipliers but also earns re-spins and gives players much better opportunities at the big jackpots.

The minimum bet for Atlantis Megaways is 20 cents. The maximum bet is $25.

With an RTP of 96.10%, Atlantis Megaways counts as an above-average game in this category. As a general rule, most online slot games have an RTP of 90-95%, which is greater than slot machines at land-based casinos.

Keep in mind that the RTP of a slot machine is the average taken from hundreds of thousands (and even millions) of spins and not a guarantee to win.

However, players should know this is an outlier as a Megaways slot–most Megaways games are ranked medium-high volatility or higher. Because this game is a medium volatility game, it is considered more appealing to a larger audience of players.

The hit frequency of Atlantis Megaways is 25.44%, which ranks high among Megaways games.

For example, another Megaways games

Remember: Hit frequency is different than RTP, counting for the percentage of times an online slot will stop on a winning outcome.

As is custom with Megaways games, game multipliers and re-spins can pad the pot to make the Atlantis Megaways jackpots bigger.

Keep in mind, though, that these figures are simply the top payout–which is the absolute highest a player can win. Also, Megaways mechanics offer players 117,649 ways to win.

Jackpot-wise, Atlantis Megaways offers four different jackpots, which players can win in addition to regular payouts. This is possible as part of the Pearl Jackpots feature.

Atlantis Megaways is different than many other Megaways games for two reasons: First, it has multiple features; second, there is no Free Spins round.

Both factors into the overall gameplay–the multiple features provide a better gaming experience but no Free Spins can limit your winnings. However, this game does offer cascading reels and re-spins.

As one of the more popular game features these days, Atlantis Megaways includes a cascading reels option.

Here are the basics of cascading reels: When players land a winning combination, the winning symbols exit the reel and different symbols drop down to replace them.

This process continues until there are no more winning symbols. Why are the cascading reels so beneficial to players? As the symbols replace, players get multiple win chances on every spin.

In the Jackpot Respins feature, players are introduced to the Wild symbol (Temple) and Scatter symbol (Treasure Chest). The Treasure Chest is the most important symbol of the game, garnering the highest payouts.

By hitting six or more scatters, the Jackpot Respins feature, which offers players three re-spins. During these re-spins, the Treasure Chests stay on the reels. If players land additional scatters during their re-spins, then their re-spins refresh to three.

Players continue their re-spins until either

A) no more scatter symbols are visible on the reels

B) all positions on the reels are filled up with scatter symbols.

These scatters provide a value between 1-100x. Players’ wins will be added up to produce a cumulative payout from the Jackpot Respins round.

There are the four jackpots available in the Pearl Jackpots feature in Atlantis Megaways, which counts as the most exciting and lucrative bonus round in the game :

Hitting these jackpots is crucial to earning the game’s maximum payout.

One of the great things about Reel Play entering the Megaways market is the top-notch graphics that they bring to the table. Perhaps more impressive than the well-rounded gameplay with winning metrics and feature games are the great graphics.

It’s clear that Reel Play put a lot of work and importance into this area of the game. The game is set in a deep ocean and lit up by sunlight.

The colors are vibrant, sticking with the Atlantis theme.  It is, by our estimation, one of the most visually pleasing Megaways games to debut.

With sea creatures making up the symbols, the theme is visual throughout. There is a strong blue presence on the game screen, which is no surprise, given the game’s setting. The reel is incorporated by eye-popping graphics and quality animations that really stand out.

Audibly, Reel Play has matched efforts with its great graphics: The background soundtrack, sticking with the theme, is that of upbeat music that keeps players engaged in the game.

Altogether, the look and sound of the game are elite and surpass the value of the gameplay. It’s a game that players will love to splurge on for an extended period of time.

Beautifully designed, the first thing that will strike you is the epic soundtrack which is good enough to serve in a movie – it’s quite uplifting and euphoric.

Solutions if you have some issues with a game

If the game is interrupted during play, players can replay the game round after restarting the game. If the player chooses to skip the replay, their win will be added to their balance immediately.

In any situation where the replay-functionality is not sufficient, you can contact the gaming website’s support team.

In the event of a gaming hardware/software malfunction, all affected game bets and payouts are rendered void, and all affected bets are refunded.

Overall, Atlantis Megaways is a strong debut with the Megaways mechanics. ReelPlay partnered with Big Time Gaming to produce a simple, visually stunning, and fun game for both beginners and experienced players.

However, ReelPlay still has a ways to go if they are going to produce the same quality of games as they have with their Infinity Reels games.

Obviously, the big plusses in Atlantis Megaways are the strong 96.10% RTP, high hit frequency, and multiple bonus rounds, which include the unique Pearl Jackpots round. In that bonus round, players can win four bonuses in addition to their standard game winnings.

The lack of a Free Spins round is somewhat mitigated by the Jackpot Respins feature, but Free Spins are a staple of Megaways games: While the Respins bonus round can offer big winnings, it’s rare.

As with many games, the proof will be in the player’s preferences: If you’re interested in a great-looking and sounding game with 117,649 ways to win and multiple bonus rounds, Atlantis Megaways could be the game for you!

Other slots to play if you like Atlantis Megaways slot