There are thousands of slots, but few are so ingrained in the collective consciousness like Book of Dead. This Play'n GO title helped cement its reputation as a top provider while offering innovative features. In this comprehensive review, I checked every aspect of Book of Dead to give you a fair analysis of how good it is. 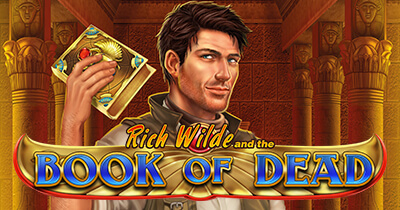 This slot has an Ancient Egypt theme which reminded me of Indiana Jones. The title boasts an exciting number of features, considering it’s a 2016 release.

Book of Dead is set in an Ancient Egyptian tomb and, far from being a regular slot, is rich with features. There are expanding symbols, free spins, and some story elements, such as the adventurer Rich Wilde going on a treasure hunt.

This slot is arguably the most popular “Book” title, and it’s still one of the most played slots everywhere, thanks to it becoming the target of many casino promotions. I will share everything I researched about Book of Dead in this article.

The Most Important Things About Book of Dead

To get a complete picture of a slot, you must analyze it from several angles. These are the items I checked for Book of Dead:

What Is Book of Dead?

In this title, the action happens across five reels and three rows. Here is more info:

Book of Dead looks like a typical 5×3 slot, with only 10 paylines. Its mechanics are what keeps the ball rolling. The expanding symbols are one of them; the scatters are another. I’ll delve into them later.

The maximum payout is 5,000x, which is a perfectly fine multiplier. But there are also important prizes before it, such as 150x on certain symbol combinations.

What Kind of Game And Bonus Features Does Book of Dead Have?

There are several interesting base features and special ones. Here’s an overview of the first:

Book of Dead Has Limited Base Game Features

Book of Dead only has one special feature in the base game, but it’s a good one: the tomb scatter symbol also doubles as wild. I’ll detail this below.

There are nine paying symbols, ranging from the classic card 10, J, Q, K, and A; and Horus (bird), Anubis (dog), and Osiris (golden figure), as well as the main character Rich Wilde.

They all have good winning potential since even the card symbols have a maximum 150x or 100x payout, for five. Getting Rich Wilde five times on any payline yields the max prize, 5,000x.

If you get three or more scatters, you get 10 free spins. This symbol also pays 200x for five, and it’s also a wild, it substitutes other symbols to create winning combinations. It’s also possible to trigger more free spins during the bonus round.

There is no Bonus Buy option for Book of Dead.

Hold and Win feature on Book of Dead

What Bonus Game Features does Book of Dead have?

There is a free spins round that you activate when getting three or more scatter symbols. In this feature, a random symbol is selected to expand over the reels, which can get you more free spins.

Other Noteworthy Special Features In Book of Dead

Book of Dead has some extra features too. They are:

Aside from what I already mentioned about the autoplay feature, there are other noteworthy ones. The most important one is the adjustable paylines that go hand in hand with the adjustable bet size.

What’s The Story Behind Book of Dead’s Theme?

Book of Dead aims to recreate the thrill of adventuring through Egypt, highlighting that the main character is a treasure hunter. This is a nice spin on the many Ancient Egypt-themed slots out there.

At first glance, Book of Dead might seem part of the series commencing in 2005 by Novomatic’s Book of Ra. But the fact is these are two separate games developed by two different companies. There are many similarities, such as the theme, but Book of Dead is a standalone title.

Symbols and animations are very detailed, and they perfectly recreate the Egyptian atmosphere with the background. Symbols are distinctive and easy to distinguish.

Book of Dead has good sounds and music but nothing extraordinary. The music is functional and never distracts from the main action.

Who Made Book of Dead?

This title was developed by Play’n GO. This company was formed in 2005 in Sweden and now has more than 600 employees worldwide. They were the first to develop mobile games. Thus, you can be sure all of their titles, Book of Dead included, work flawlessly on smartphones and tablets.

These are other top slots by Play’n GO I recommend

There are many excellent Play’n GO games, but in my opinion, these are the best ones:

Final Words – Is Book of Dead The Best Slot Ever?

Book of Dead is one of the most popular slots, and with reason. Its simple yet engaging mechanics offer a straightforward experience without missing bonus features. Whether it’s the best slot ever is a personal decision, but it’s definitely a contender.

The simple gameplay, considerable symbol wins, and free spins are a good combination that all players will enjoy, from casual slot enthusiasts to experienced ones.

Is Book of Dead available in the USA?

Yes, you should check casinos offering Play’n GO games to find it.

What is the RTP of Book of Dead?

Can I play it for free?

Yes, there’s a free version on the Play’n GO website.

How do I know it’s not rigged?

Play’n GO is a reputable developer that gets third-party audits to verify their games are safe and fair. You should also find reputable online casinos to play in.

Are there promotions for Book of Dead?

Book of Dead is often the subject of promotions like Welcome Bonuses. You should check this with your favorite casino.

What do I do if Book of Dead malfunctions?

The first thing is to contact the casino support team. You might be able to resume playing if it was a temporary issue, such as a momentary connection loss.