The Japanese warrior code is on full display in the Bushido Bounty slot by High 5 Games. Aside from its showcase of the famed Japanese culture, this online slot tests your limits as you play for your bounty. Read this review and learn how you can unlock the Scatter Bucks, Stacked Wilds, and the Expanding Wilds! 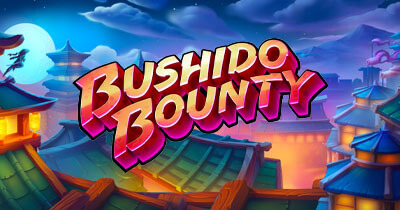 Bushido Bounty – Master the Way to the Bounty

What’s the Bushido Bounty slot’s top payout, and does the Japanese theme live up to its hype? When it was released in 2022, these were just two of the questions asked by players about the game. Indeed, is this High 5 Games slot a worthy slot machine to play in real money mode? Are its features and potential jackpot enough to provide an exciting gambling experience?

Our team at usonlinecasino.com understands these requirements when it comes to online slots. As part of the website’s commitment to fair game reviews, I look at the game’s features and bonuses. This Bushido Bounty slot review is complete, objective, and easy to read, which can help you decide whether it’s a worthy game to try.

What I checked in Bushido Bounty

What is Bushido Bounty?

Which are the Game and Bonus Features on Bushido Bounty?

Quite impressive base game features

Following the way of the Japanese warriors can offer you exciting ways to win. Bushido Bounty slot comes with Wilds that can substitute for other symbols except for the Bonus Scatters. Also, your Wilds carry credit values of up to 2,000x the bet. Another exciting feature called the Scatter Bucks also delivers big wins.

In the Bushido Bounty slot, you’ll meet our mighty and colorful Japanese warriors: the Purple, Red, Green, and Blue Warriors. They are the game’s high-paying symbols, and joined by royals from a standard deck of cards as the low-paying symbols.

Four Japanese warriors in different colors dominate the game’s paytable. They all pay up to 1,250x your bet when landing five-of-a-kind on the screen. In contrast, you only get up to 150x your bet for five-of-a-kind for the low paying symbols.

It’s more than likely you’ll unlock the Scatter Bucks feature during the base game. Once active, you win a specific value and the prize from your random winning combination.

Collecting Bonus Scatters helps start the game’s only Bonus: the Free Spins. Free spins are standard bonus features in many slot machines, and in this High 5 Games slot, the mechanic remains the same. So if you collect three or four Bonus Scatters, you get 8 or 15 free games.

Any Innovative and Special Features on Bushido Bounty?

Bushido Bounty slot features a clean betting menu, and the buttons are easy to understand and use. The Bet size button is at the bottom-right portion of the screen, and the ‘Spin’ is also conveniently positioned slightly above.

The game’s title and theme are inspired by the Japanese warrior’s code called Bushido. It tells the story of the famed warriors, and you join them on their quest to earn the victory and find the bounty.

The design of the characters is professionally done. Also, the other details from the Wild’s representation and the background have a uniquely Japanese feel to them. I also love the video game vibe that you can see once you open and play the game. The screen’s visuals and action are flashy, even if the details aren’t that clean and sharp.

Playing this slot machine becomes better thanks to its highly entertaining sound. It uses oriental-themed sound effects which sets the tone for a Japanese warrior adventure on the reels.

Who made Bushido Bounty Slot?

Bushido Bounty slot is a 75-paylines game from High 5 Games.

Conclusion – Is Bushido Bounty Slot Better Than the Others?

To wrap up this Bushido Bounty slot, let’s go back to our previous concerns: is the game’s theme worthy of our leisure time, and does it pay enough? Regarding its overall production, the Bushido Bounty slot offers an engaging casino experience as it takes the players to feudal Japan to meet the famed warriors. But when it comes to potential payouts and jackpot, this slot machine disappoints. For example, you can only win up to 15 free games without re-trigger, with a max payout of up 2,000x your bet.