The battle for Asgard and its riches begins in this online slot from High 5 Games. Read our full review below to learn about this game's nudging reels, random multipliers, and more. 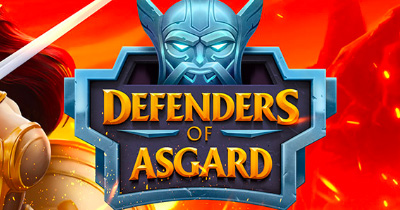 In popular mythologies, the Norse stories on Asgard, Thor and its riches are colorful and action-packed. Now, the story returns on the reels with Defenders of Asgard slot by High 5 Games. With a 5-reel and 10 paylines setup, this slot brings Scatters and Random Multipliers. Prepare for a battle on the reels, read this review below.

Defenders of Asgard – Keep a share of the loot!

So, here is another Norse-themed slot machine that is playable in many US casinos. Is this worth our time and money? Are the symbols and payouts more than enough to sustain our interest? For regular online slot players, these are frequent questions that require answers. If we are to play in real money mode, it is important to check the game and what it offers before diving in.

In this review, I consider all these to produce a fair assessment. This review offers a glimpse at what the slot can offer, and it is written in a simple yet objective way.

What I checked in Defenders of Asgard

What is Defenders of Asgard?

Defenders of Asgard is an exciting Norse-themed slot machine from High 5 Games. It comes with a 5-reel and 10 paylines setup with high variance.

Which Game and Bonus Features Defenders of Asgard has?

Quite impressive Base game features

Once you open the game, you are transported to the vast expanse of Asgard. Theme-wise, Defenders of Asgard is colorful and pays homage to the Norse gods. Payouts are yours when landing at least three matching symbols starting from the left. Also, there is a Nudging Feature that boosts your chances of collecting a win.

The Norse gods like Odin, Thor, Frigga, and the Valkyrie are the game’s high-paying symbols. For the low-paying symbols, Defenders of Asgard slot relies on the standard playing card suits. Also, this game packs a Wild and the Demon that acts as the Scatter.

Collecting a five-of-a-kind for Odin and Thor offer up to 250x your bet. Frigga and Valkyrie, on the other hand, deliver up to 200x the bet. The low pays in this slot machine also offer a Wild which offers a massive 2,500x your bet for a five of a kind.

During the base game, players can randomly activate the Nudging Reels. This feature happens at random and offers the player a chance to complete a winning combination. If it happens at the right moment with special symbols, you can even start the bonus.

The Asgardian battle for prizes on the reels become more exciting thanks to the game’s decent selection of features. Aside from the Nudge feature and the presence of the Wilds, this game brings a Free Spins bonus. Collecting three Scatters award you with 10 free games and landing all five awards you with 25 spins. There is a chance to re-trigger this feature but these symbols will only appear on the second to the fifth reels.

What innovative Special Features can be seen in Defenders of Asgard?

Defenders of Asgard slot machine is not just entertaining to look at but it is easy to play. There are helpful tools and buttons to help you play including the Turbo option and Autoplay.

What’s the Story behind Defenders of Asgard’s Theme?

For the regular casino players, the game’s theme looks entertaining and familiar. Many slot machine designers have already dabbled with this theme, and some of these games are successful. Again, Thor makes a starring role here, but he is not the most important, at least in terms of payout.

When it comes to graphics and visuals, Defenders of Asgard slot machine is a winner. It follows the tradition of many Norse-themed slot machines that take players to Asgard to meet the gods. Also, the choice and design of the high-paying symbols are nice to look at.

Defenders of Asgard slot also boasts a memorable soundtrack that captures the action and thrill on the reels.

Who made Defenders of Asgard?

Defenders of Asgard slot is designed by High 5 Gaming. This software vendor is licensed by the Malta Gaming Authority (MGA) and incorporated under the laws of Malta.

Conclusion – Is Defenders of Asgard better than the others?

This High 5 Gaming slot runs using a familiar theme, but it still manages to create a satisfying slot experience. The choice of background and design of symbols have that cinematic feel to it, and the payouts are decent enough. Watch out for the game’s only bonus- the Free Spins round- which allows you to win up to 25 free games with a chance to re-trigger the bonus.