The internet has many colorful slots we can play, but how many of them have cute alien characters? Reactoonz features an array of cheeky alien monsters, and several exciting sci-fi bonuses. In this review, I’ll explain everything about Reactoonz and how you can enjoy this colorful slot. 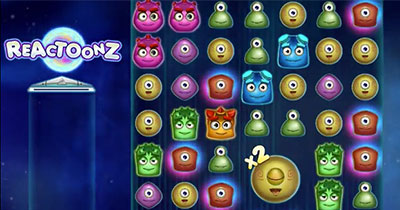 Made by Play’n GO, Reactoonz is jam-packed with bonus features. If you want to learn more about Reactoonz, keep reading!

Reactoonz is a sequel to Play’n GO’s Energoonz, but this time the cheeky creatures come loaded with Quantum energy and five unusual base game features!

Reactoonz comes with a cluster pays mechanic, which means you can get payouts for more than five or six symbols, which is a little different from most slots. I’ll go into more detail about this, as well as how I checked this slot, including its overall design and what you need to do to trigger the bonuses, throughout this Reactoonz review.

What I Checked in Reactoonz

Reactoonz may play a little differently from most slots, but it still needs to be examined using the same factors. These are the things I checked:

What Is In This Reactoonz Review?

Here’s a brief overview of what to expect from Reactoonz.

Reactoonz is a 7×7 slot provided by Play’n GO filled with eight kinds of cute, colorful aliens. Its cluster pays mechanic means you can get high payouts from 15 or more matches, which is undoubtedly its main selling point. However, I also really like the choice of bonus features, as I’ll highlight below.

What Game And Bonus Features Does Reactoonz Have?

Most of these are fueled by Quantum energy, Reactoonz’ unique bonus mechanic. There’s a ton to unpack, so I’ll go through everything below:

Fun and Explosive Base Game Features

You don’t even need to land a winning combination to trigger some of these base game features, which is a refreshing thing to see in a slot. First, though, I’ll start with the basic symbols.

Instability is the one base game feature that can appear after an initial non-winning spin. The Gargatoon drops between four and eight wild symbols to give us more winning combinations.

This happens when you match four aliens in a square. When you do, the square turns into a giant alien head and doubles your winnings.

Each spin decides on any one-eyed alien to be a fluctuating symbol. If the fluctuation forms a winning combination, it leaves two wilds.

Winning combinations fill up both the Quantum Leap meter (to trigger bonus) and a smaller Quantum queue. If the latter gets filled up, it wakes up the Gargantoon. This appears on the reels as a wild, then after new symbols cascade down, Gargantoon splits and moves positions. First, into two 2×2 wilds and then into nine on the following cascade.

Can You Hold and Win?

Unfortunately, there also isn’t a Hold and Win mechanic in Reactoonz.

When three to six symbols become wild, they create an implosion. During implosion, the aliens nearest the wild symbols get destroyed.

In incision, the grid gets divided by two diagonal lines running from a central wild. Each symbol along a diagonal also becomes a wild.

The low-value aliens and any matching symbols are destroyed. This makes way for larger potential wins.

All instances of a random low-value alien transform into another alien. That alien can either be of higher or lower value.

Reactoonz also comes with a host of features to customize your gameplay.

As you might expect, you can tweak a bunch of options. I was especially pleased to see Reactoonz lets you speed up gameplay with a ‘turbo’ (lightning bolt) icon, as well as set win/loss limits in the autoplay section.

Is There a Story Behind Reactoonz’s Theme?

Yes, in that Reactoonz follows on from Play’n GO’s own Energoonz slot, although it boasts plenty of unique features. The graphics and sound have also received an upgrade, as I’ll note below.

These aliens are adorable with their own little animations that will play every so often;  yawning, blinking, looking around– you name it! In fact, everything is animated in a colorful 2D style, including the sleepy Gargantoon on the right of the reels.

The background music starts as minimal ambient sounds before dramatically building into an upbeat electronic score the longer you play/the more wins you land. Otherwise, the aliens make little yelps and burps every so often. All of this adds up to a delightfully immersive experience.

The company behind this game is Play’n GO, a reputable developer well-known for its high-quality games and interesting mechanics. Reactoonz is one of its most popular titles, but I’ve highlighted a few more below.

A Few of My Favorite Slots by Play’n GO I Highly Recommend!

Is Reactoonz Worth Playing?

Absolutely. There are plenty of reasons to give Reactoonz a spin, least of all its cluster pays mechanic and adorable, immersive game design.

It vastly improves upon the original Energoonz slot with its multiple explosive bonus features and raises the bar for other cluster pays slots to follow, like Sugar Rush by Pragmatic Play.

Is there a wide betting range for Reactoonz?

What’s the biggest payout in Reactoonz?

Play’n GO haven’t actually noted the maximum win, but the pink alien comes with a 750x multiplier, which can be combined with other multipliers to end up being around 5,000x.

Unfortunately, the slot does not offer free spins.

How many aliens are there in Reactoonz?

There are eight aliens in Reactoonz. The pink alien is the most valuable, while the yellow one is the least valuable.

Can I play a demo version of Reactoonz?

Yes. Check our site for recommended casinos with this game, most of which should come with a free-play version.