A modern twist on a classic slot theme

Inspired Gaming has kept the retro feel of Cops ‘n’ Robbers while applying the Megaways format and some interesting bonuses to freshen up the concept. The result is a crime caper hit with a hint of nostalgia. Read this comprehensive Cops ‘n’ Robbers Megaways review to find out more. 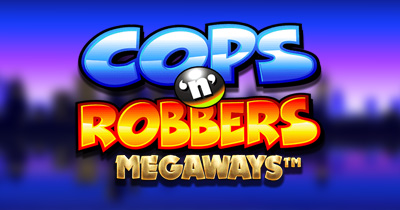 This slot is played over a slightly unusual grid format with six reels and an extra horizontal reel that adds four symbols to the middle columns.

Cops ‘n’ Robbers Megaways Review – Get Away With the Loot!

When you’re playing this Megaways slot, you’ll want to make the most of it. One of the ways to do that is to trigger all of the features while on the run from the cops.

Not only do bonus features make the game more entertaining, but triggering them gives you more chances to escape with the loot. I rigorously tested Cops ‘n’ Robbers and gathered the key details to guide you through the bonus rounds and how to trigger them.

To get to the bottom of what kind of experience you’ll have playing a slot, a thorough review is required. Here’s a list of all the steps that get to the heart of the matter.

What is Cops ‘n’ Robbers Megaways?

Let’s start with the nuts and bolts of how this game works and who produced it.

I like that Inspired Gaming has combined the theme from the old Bell-Fruit slot machines with the Big Time Gaming Megaways feature. The layout is unusual too, during my Cops ‘n’ Robbers Megaways review, it felt comfortably familiar but fresh at the same time.

Which Game and Bonus Features Does Cops ‘n’ Robbers Megaways Have?

A slot’s features are what bring it to life.

The cascading reels on this slot are nothing new, but I like that they give you extra chances to win without spinning again. The Blue Light and Red Light features are triggered randomly. It adds anticipation to the base game beyond waiting for the bonus round.

The dog is the Wild that substitutes for all paying symbols. It only appears on the horizontal reel at the top of the grid.

As well as having 117,649 ways to win, the symbols in this slot disappear when they’re part of a win. New ones drop into place, giving you another shot at landing more combinations, and it keeps going until there are no more wins.

The blue light of the cop car will go off at random during the base game. You’ll see a random amount of mystery symbols added to the reels.

The other part of the cop car is the red light. It’s also triggered randomly, and it sends the robber running across the reels from left to right. He moves when the light is green. The number of ways to win increases with each spin until you reach the max. If the robber makes it to the other side, bonus symbols are added.

Hold It – No Hold and Win

The slot doesn’t have the Hold and Win feature.

The Cops Are On Your Tail!

I’m impressed that there’s a choice of bonus games. The Chase feature is a bit more complex, which ups the entertainment value significantly.

The robber acts as the scatter. Landing three triggers the bonus choice, where you can launch the free spins or The Chase. Three scatters get you eight spins, and you get an extra two for any additional robber bonus symbols. Cascade wins increase your win multiplier by one each time in this round.

You get three moves around the board in this game. You’re the robber, rolling red to show you your moves, while the blue is the cop on your tail. You collect cash from the squares you land on, but if the cop catches you, you go to the ID Parade.

Depending on who gets picked out, you could collect your winnings, keep playing for more, or get a bonus and keep playing.

There are a few tweaks to change the game.

This slot ticks all the boxes for adjusting the game to the way you want to play.

The theme comes from an old land-based slot machine. It was revived by Novomatic in 2013, and this new addition to the good guys vs. bad guys legacy brings a nice dose of nostalgia.

The graphics are what connect the slot to the original, and I think Inspired Gaming really hit the mark.

While some slots have an annoying soundtrack, for my Cops ‘n’ Robbers Megaways review I found that the theme fits the mood to perfection.

Who Made Cops ‘n’ Robbers Megaways?

Inspired Gaming made this retro Megaways slot. It’s an international provider that works in 35 jurisdictions supplying games and other entertainment content.

My Favorite Slots From Inspired Gaming That You Might Enjoy

Is Cops ‘n’ Robbers Worth Your Attention?

In this Cops ‘n’ Robbers Megaways review, I found the slot absolutely shone compared to other US slots. What made it stand out, besides the retro feel and Megaways format, was the excitement that it delivered in the base game and the bonus round. Those randomly triggered features and the board game take it to the next level.

How many paylines does Cops ‘n’ Robbers Megaways have?

The highest-paying icon is the game logo.

The maximum win you can collect is 12,500x your stake.

How do I trigger The Chase bonus feature?

You get a choice of free spins of The Chase when you land three or more scatters.