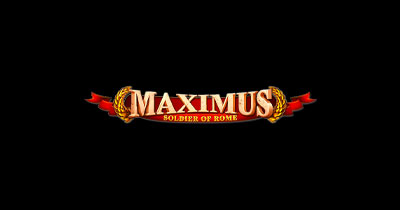 How I Tested Maximus Soldier of Rome

Conducting a comprehensive review of any slot game means investigating specific elements. Let’s have a look at the various categories.

Play Maximus Soldier of Rome With the Best Bonus

Bonuses and promotions have the power to establish your gambling career. If you can get in with a reasonable offer, you’ll get more bang for your buck.

Inspired NYX is a novel name in the casino industry, and many operators host its slots.

Maximus Soldier of Rome is no exception and, among others, you can play it at the following sites:

Golden Nugget Casino offers a $10 no deposit bonus and a 100% up to $1,500 deposit offer. If you want to get your slot gaming off to a good start, this is a promotion worth considering.

Maximus Soldier of Rome is a five-reel slot with 20 paylines. As with most standard slot types, the game mechanism reads wins from left to right.

This slot has nine paid symbols and two special characters, creating a total of eleven. The signs mostly have Roman centurion themes. However, the bottom rung on the paytable consists of the face card characters.

The most valuable symbols are the ‘Maximus Soldier of Rome’ images, followed by the Colosseum and chariot.

Maximus Soldier of Rome caters to punters with various bankroll sizes. You can bet as little as $0.10 or stake as much as $250. This game easily qualifies as a low-end high roller slot.

You can even set a win stop so it stops spinning if you win a certain amount. You also need to implement a stop loss, so the auto spins stop when you lose too much money.

The Maximus Soldier of Rome RTP is rather disappointing. At 95%, this return rate is significantly lower than the average RTP of 96%.

Medium volatility slots are neither the one nor the other. This game could go either way, and you won’t know which until you start spinning.

This game doesn’t have the worst-hit frequency that we’ve seen. While we were playing, it typically yielded one or two hits for every five spins. However, it also went down to one hit in ten spins twice.

This game is about as far from a progressive jackpot as you can get. However, for a standard slot, the payout is excellent. You can win as much as $250,000, depending on your stake.

An Awful RTP but Fantastic Win Potential This game has a spectacularly low RTP, which I’d not recommend. However, the win potential is good, and the hit rate isn’t too low.

This game has several features that might appeal to gamblers. The bonus wheel is the gateway to many perks.

Wilds, Re-Spins and Other Features

While this game doesn’t feature any stacking or walking wilds, it’s far from disappointing. You may enjoy the bonus reels and consequent features.

The wild symbol in this slot takes the form of a laurel crown, with the word ‘WILD’ imprinted on it. It can take the place of any character except the bonus image.

Maximus Soldier of Rome doesn’t have a re-spin function. However, you can still take advantage of Caesar’s free spins if you can get them.

This slot doesn’t feature any multipliers, but it does feature modifiers. At any time, a centurion may appear in the corner of the screen to award a reel modifier.

Reelus Maximus awards one gigantic symbol somewhere on the reels. It fills a 3×3 section and serves as nine characters of the same kind.

Super bonus reels increase the number of bonus symbols for a single spin. It improves your chances of getting into the bonus feature.

The big win function assures you that you’ll get a big win made of the Maximus symbols.

You can get into the bonus feature by landing three or more bonus symbols. The game then takes you to a feature wheel, which you need to spin to get into one of the bonus games.

The wheel isn’t the same every time and depends on how many bonus symbols you land. Fewer characters equal more possible features, and vice versa.

Each feature is distinctive and may contain some or all of the following bonus features:

Prizes on Parade features three shields. The shields contain various prizes, arrows, and collect functions. A light dances across the shields’ rewards, and you need to stop it by clicking the button.

The collect option goes with a prize, added to your pot before the feature ends. At the end of this bonus, the pool gets multiplied by your total bet to award you a prize.

Road to Rome is the most complex of the bonus features. You get transported to a game board with a Centurion as a playing piece.

When you roll the dice, the Centurion moves the designated amount of spaces. As he goes, he collects different prizes.

You get a certain number of rolls displayed on the screen, so you know how many are left. If you land on a square with dice on it, you’ll get two extra rolls.

It’s possible to win more impressive prizes by advancing to Rome. You accomplish this by making it to the board’s end, or the ‘go to Rome’ square.

In Rome, many fantastic prizes appear, and a moving light will choose one at random. The slot will add this to your running total, which gets multiplied by your total bet at the feature’s end.

This feature has a running total and grants three wild power spins. On the first spin, the Centurion appears to place three wilds on the second reel. All the wins get added to your total.

On the second spin, the Centurion adds three wild symbols to the third reel. Again, the winnings get added to your total.

The third spin sees the Centurion repeat the process on the fourth reel. At the end of this spin, the winnings join the total, and the feature ends.

Before the free spin feature commences, the player sees two wheels. The one determines the number of spins, and the other gives a win multiplier.

You then go to the feature, and the reels spin the specified amount of times. The slot multiplies every win by the predetermined multiplier.

You can’t buy your way into this game’s bonus features. If you want to play the bonus rounds, you need to earn them fair and square.

This slot features an almost staggering array of bonus features that you can’t help but enjoy. I’d recommend it.

Graphics and soundtracks affect more than people realize. Does this slot meet the standard?

The audio on this slot is a perfect fit for the theme. The graphics are basic but effective, and we found no reason to complain.

Solutions If You Have Some Issues With a Game

This game is unusual in that if you accidentally close your browser or the internet dies, it restores the last saved state intact. As with most slots, if the machine malfunctions, you get your stake back and lose the affected spin’s winnings.

This Maximus Soldier of Rome review was a positive one. Despite a low RTP rate, this game compensates in every other category. The max win of $250,000 is impressive, and the stake options are diverse.

The war bugle soundtrack fits the theme brilliantly, and the graphics are passable. Not to mention the plethora of bonus features that make this game so enjoyable.

We’d recommend this slot any day.

If you enjoy this slot, you should consider other games from this provider. Examples include Jackpot Jester Wild Nudge and Spin Sorceress. You might also want to consider games with a similar theme.

Examples include Gladiator and Rome & Egypt by Playtech.