Thunderstruck II is an electrifying take on the Norse mythology on the reels from Microgaming. Read our full review below to learn about this game's Hold and Win feature, free spins bonus, and more. 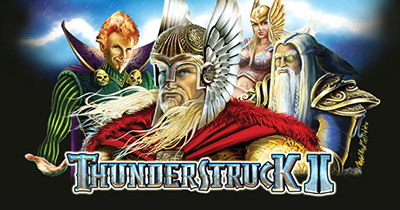 Thor and the other Norse gods return with more electrifying actions and win in Thunderstruck II by Microgaming. With its 5-reels and 243 paylines setup, this slot machine features the Great Hall of Spins, where players can pick from four bonus options, each with different rewards and modifiers. Learn more about the Thunderstruck II slot in this review before you wager using real money!

Thunderstruck II – A Firestorm of Prizes

In online slots design, it’s common for many software vendors to design a follow-up for their successful productions. Microgaming’s Thunderstruck II slot machine is a perfect example, a game that reignited the fiery passion for the Norse mythology theme. But is the effort of Microgaming worth it to revamp the classic title? Are there any distinct differences between these two online slots?

If you’re after an exciting and rewarding slots experience, it’s best to review the game’s potential. We continuously check the best online slot if it’s worth our time and real money wagers: its theme should be engaging, and boasts exciting bonuses and exceptional payouts. So, does Thunderstruck II meets all these?

We understand the need to review an online slot as slot players thoroughly. In this Thunderstruck II slot review, we check and play the game to see its features. The complete review is objective and written in a step-by-step manner so you can easily find the information you need.

What I checked in Thunderstruck II

Here are the things I checked in this popular Microgaming slot machine:

Where Can I Play Thunderstruck II Online Slot?

US players can find Thunderstruck II at most top online casinos, including:

What is Thunderstruck II Slot?

Thunderstruck II online slot is a follow-up to the hugely successful Thunderstruck from Microgaming. It’s a 5-reel and 243 paylines game that pays homage to the legends of Thor and the Norse gods.

Quite impressive Base game features

Thunderstruck II slot relies on a colorful theme and an electrifying set of characters as paying symbols. But beyond this Norse theme, this Microgaming slot packs exciting potential winning moments during the base game. The keys to wins are 12 regular and special symbols, and you need at least three matching symbols to collect a payout.

This Microgaming slot machine boasts 12 colorful symbols associated with the Norse mythology. You have the 9s and standard Royals imprinted in stone for the game’s low pays. Also, players can expect bigger wins from the Norse Ship, the Bifrost, Valhalla, Valkyrie, Loki, Odin, and Thor. The Logo Wild also helps unlocks more wins as it replaces low pays and doubles all wins.

The game’s paying symbols are inspired by Norse mythology and its gods. Among the regular-paying symbols, the smaller wins come from the Norse Ship, Valhalla, and the Valkyrie, which pays 8.33x, 10x, and 11.66x your bet for a five-of-a-kind. For bigger wins, watch out for the arrival of Loki, Odin, and Thor. If you land a five-of-a-kind for these symbols, you can collect 13.33x, 15x, and 16.67x the stake. But the biggest payout comes from the Bonus Scatter that pays up to 200x the bet. Also, landing a specified number of Bonus Scatters starts the game’s Bonus round, explained below.

In this Thunderstruck II slot review, we found an exciting feature randomly activated in the base game. This feature is the Wildstorm, and when activated, Thor uses the lightning bolts to transform one to five reels into wild reels. If the player randomly transforms all five reels into wilds, they win 8,000x the bet!

The Hold and Win mechanic is an exciting feature in many slots that help improve the player’s chances of winning big in the bonus round. Once activated, the participating symbols remain sticky for another spin, and you play for the potential jackpot.

This bonus option is activated on the first trigger and rewards the players with ten free spins. Also, all wins have a 5x Multiplier, but the Valkyrie free spins cannot be retriggered.

The Loki bonus is activated in the fifth bonus trigger and offers 15 free spins and the Wild Magic feature. If the Wild Magic appears on the third reel, it will randomly transform other items into Wild Magic symbols. You can trigger one, two, three, or four free spins by landing two, three, four, or five symbols in this feature.

This bonus option works on the tenth trigger of the Scatters. This option rewards the player with 20 free spins and the Wild Raven feature. Upon activation, you will find two Ravens that hang above the reels, and they will descend to transform symbols into 2x and 3x Multipliers. If both Ravens land, it awards you with a 6x Multiplier.

The last bonus option is Thor, and it’s activated on the 15th trigger of winning Bonus Scatters. Once you start this Bonus, you get 25 free spins and the Rolling Reels feature. With the Rolling Reels, winning symbols are removed from the screen to allow new ones to drop into the gaps and potentially create a winning combination. Also, a Win Multiplier increases to 2x, 3x, 4x, and 5x after every win.

What innovative Special Features can be seen in Thunderstruck II?

Microgaming is an experienced designer of slot machines, and its experience shows in the design of the Thunderstruck II slot. This online slot packs the standard betting buttons, and they are all lined up on the left side of the screen. Unfortunately, there’s no Max Bet button on the menu, and you need to click the coins icon to change your bet.

The Thunderstruck slot is one of the most popular slot machines, so it isn’t surprising that Microgaming decides to spin another version. In the Thunderstruck II slot, the same theme and cast of characters are present that delivers the wins. Thor is still the lead paying symbol, but the game becomes more electrifying with its Great Hall of Spins, Rolling Reels, and Win Multiplier this time. An epic soundtrack also helps players feel the action when spinning the reels.

Thunderstruck II slot game comes with a familiar theme and engaging graphics. In our Thunderstruck II review, we noticed the colorful design of the Norse gods as paying symbols. I love how these symbols are displayed on the screen, and they come with a comic book feel to them. Also, as you play in the base game, you will randomly witness the storms and lightning strikes. With these effects, the game becomes more engaging and cinematic at best!

Rumbling sound that players will love

Microgaming has pulled off an online slot with an epic soundtrack. The music used here is fit for a Hollywood movie, and the thunder and lightning strikes during a base game feature also boost the players’ excitement.

Who made Thunderstruck II

Thunderstruck II slot game is from Microgaming. This slot machine is a follow-up to the original Thunderstruck online slot released in 2010.

Conclusion – Is Thunderstruck II better than the others?

After a thorough Thunderstruck II slot machine review, I can say that it’s a welcome follow-up to the 2010 release. The game certainly improved on several aspects, particularly the quality of bonuses and other in-game features. In addition, I love how the Rolling Reels, Win Multiplier, and the Wildstorm feature fit into the whole production. Finally, with a top payout of up to 8,000x the bet, the Thunderstruck II slot is undoubtedly one of the biggest hits from the Microgaming portfolio!